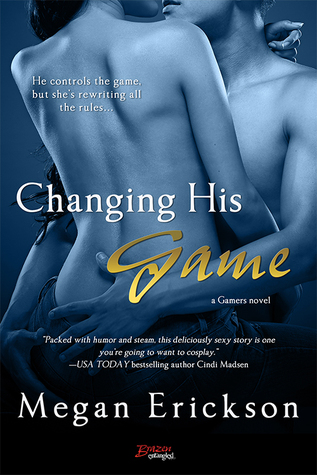 He controls the game, but she’s rewriting all the rules…

Marley Lake is no stranger to awkwardness, but getting caught watching a dirty GIF by the company’s hot new IT guy exceeds even her standards. That is, until she realizes he’s as turned on by it as she is. But with a big promotion on the line, she refuses to let her current dry spell be her downfall. Maybe.

Austin Rivers has no business lusting after the irresistible editor of Gamers Magazine. He’s a secret partner in the business—and technically Marley’s boss. One look at that GIF, though, and he’s ready to install a whole lot more than just software…as long as she never finds out who he really is.

But reality’s not as virtual as it seems, and when Austin’s identity jeopardizes Marley’s promotion, he has to change his game or risk losing the only woman with the cheat code to his heart.

It looks like Brazen books are not for me. I’ve tried several and none of them worked for me. I don’t know what the problem is. Maybe it’s because they are short. It’s hard to develop characters and make interesting romance when you are so limited in pages, especially when a big chunk of the book is taken by sex scenes.

Well, I tried to finish this book twice. First time I managed about 20%, had a hard time getting into the story, decided that maybe I just wasn’t in the mood for this kind of story and put it on hold. Time passed, and I picked it up again and read about 50%, then I put it aside again.

Now almost two months later I have no inclination to continue it. So DNF.

What were my issues with this book? I couldn’t connect with the characters. I found them flat and uninteresting. The romance developed too quickly, though I don’t mind in this case, because you expect this from a Brazen book. What I mind though is a lack of chemistry. Since I read this kind of books with the only purpose – to get wonderful romance with sexual tension, I was greatly disappointed.

I don’t mean to discourage anyone from reading this little story though. Many of my friends enjoyed it. If you liked Brazen books previously you probably would enjoy Changing His Game more than I did.

← What to do if another blogger came up with the same idea and posted it first?
Review: The Return (Titan #1) by Jennifer L. Armentrout →