Review: The Girl You Left Behind by Jojo Moyes 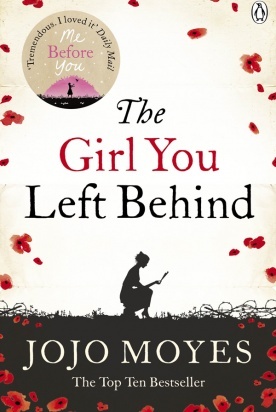 Title: The Girl You Left Behind
Author: Jojo Moyes
My rating: 5 of 5 Stars

In The Girl You Left Behind, two young women, separated by a century, are united in their determination to fight for what they love most – whatever the cost.
Whatever happened to the girl you left behind?
France, 1916. Sophie Lefevre must keep her family safe whilst her adored husband Edouard fights at the front. When she is ordered to serve the German officers who descend on her hotel each evening, her home becomes riven by fierce tensions. And from the moment the new Kommandant sets eyes on Sophie’s portrait – painted by Edouard – a dangerous obsession is born, which will lead Sophie to make a dark and terrible decision.
Almost a century later, and Sophie’s portrait hangs in the home of Liv Halston, a wedding gift from her young husband before he died. A chance encounter reveals the painting’s true worth, and its troubled history. A history that is about to resurface and turn Liv’s life upside down all over again…

“All that really matters is who you love.”

I finished this book a while ago. Life went on; I started reading other books, but The Girl You Left Behind doesn’t want to let me go. It lingers and I have flashbacks to some scenes or phrases from the book. It’s so wonderful! It was a long time since a book made such a lasting impression on me.
The Girl You Left Behind is two stories in one. The first story set in France, 1916. Sophie lives in a small town under occupation. Her husband Edouard went off to war and one of very few things that she has of him is his portrait of her. The second story set in England, 2006. It is Liv’s story. Her husband, a talented architect, died four years ago. She continues to grieve, and the only thing that keeps her going on is the portrait of a young girl, which her husband gifted her on their honeymoon. When the heirs claimed that the portrait was stolen during WWI, Liv refuses to let it go without a fight. As confrontation escalates and facts about portrait’s past revealed it began to threaten Liv’s hopes for new love and happy life.
About first 30 % of the book is Sophie’s story and then we abruptly thrown into Liv’s life. I was so shocked and frustrated. I was invested in Sophie’s story, and I wanted to know what happened to her. So it took me a while to connect with Liv. At first I thought that this was all I’ve had of Sophie and I would only see glimpses of her in letters, newspapers, and memoirs; and I was really angry, because Sophie became a real person to me. Fortunately this wasn’t the case here. There were more of Sophie’s POV weaved in Liv’s story. Actually there were more time jumps than that, because Sophie’s parts were interrupted by her memories about her husband. Though it was at times frustrating I think this structure of the book made a perfect sense. It reflects the atmosphere in which people lived during the WWI. Person didn’t know what would happen tomorrow. He could be abruptly torn away from his familiar life and his loved ones, his future unknown.
So, back to Liv’s story. As I’ve said before, at first it was difficult to connect with her. But it’s the kind of story that sneaks up on you. One moment I was annoyed and frustrated because I wanted to know what happened to Sophie, the next I’m consumed by Liv’s grieve and loneliness. The author made such an amazing job here. Liv’s loneliness was such a palpable thing, it broke my heart.
When Liv’s story started I thought that it can’t be as emotional as Sophie’s story, that I wouldn’t be so invested in Liv’s life as I was with Sophie. After all what all our contemporary mundane problems are contrary to the problems of people during WWI? I should’ve known better. Jojo Moyes made me feel, made me cry and I became so immerse in Liv’s story that at some point Sophie’s chapters became interruptions.
And I loved the romance between Liv and Paul. There was something in their relationship that squeezed my heart and wouldn’t let me go. Was it their tenderness and hope or heartbreaking revelation what they are to each other, their longing and broken hearts, their desperation, their love, strength and faith? I don’t know. I just know that I wouldn’t forget this romance for a long time.
Despite my love for Liv, my heart belongs to Sophie. It was like I was with her on every step of her heartbreaking journey. She is such a strong and purposeful heroine. There was one scene that nearly broke me
[su_spoiler title=”Show spoiler”](the scene where Sophie brought the portrait to the Kommandant)[/su_spoiler]
And another one left me in despair and anger
[su_spoiler title=”Show spoiler”](when Sophie was brought to the camp)[/su_spoiler]

“Do you know how it feels to resign yourself to your fate? It is almost welcome. There was to be no more pain, no more fear, no more longing. It is the death of hope that comes as the greatest relief.”

We don’t really know Edouard. At the beginning of the book he had already gone to the front, so we only see glimpses of him in Sophie’s memories. But Jojo Moyes wrote these short chapters amazing, Edouard became a real man and their romance with Sophie was beautiful. It made me felt her loneliness, longing and desperation even more.
When we hear the word “war” we often picture explosions, injured soldiers and think about their courage and self-sacrifice. But how often do we think about the women they left behind? Women which lived in occupation, which also made sacrifices. This wonderful book brings light to this side of the war.
Sophie and Liv had more in common than just the portrait. Both women kept going on because of their absolute faith in what they were doing. In Sophie’s case she believed that she will be with her husband again no matter what happened, and Liv was willing to risk everything to save the portrait.

“Sometimes life is a series of obstacles, a matter of putting one foot in front of the other. Sometimes… it is simply a matter of blind faith.”

The Girl You Left Behind is a heartbreaking story about love and loss and hope. Now I can’t wait to read another book by Jojo Moyes and lost myself in her characters and their life.

10 Comments on “Review: The Girl You Left Behind by Jojo Moyes”